After revealing last week that he owns 9.2 percent of Twitter (TWTR.US), becoming the company's largest shareholder and being appointed to its board of directors, Tesla (TSLA.US) CEO Elon Musk launched an online survey of his 81 million Twitter followers on Sunday, asking if they support turning Twitter's headquarters into a homeless shelter. 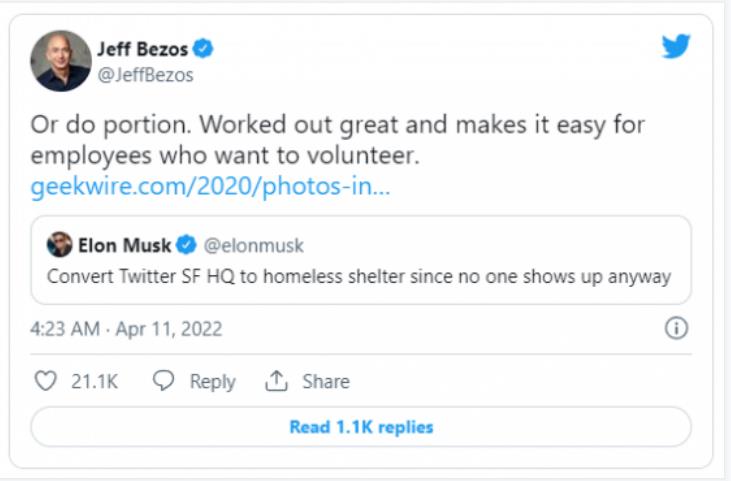 Musk said Twitter could turn its San Francisco headquarters into a homeless shelter "because there's no one there right now anyway." As of Sunday afternoon, more than 90 percent of the 1.7 million votes cast had chosen to support Musk's proposal.

Amazon founder Jeff Bezos also gave a response to Musk's survey, offering advice. Bezos retweeted Musk's tweet and replied, "Still partially revamped! Turned out great and made it easy for employees who want to volunteer." Musk agreed in another tweet, saying it was a "great idea.

The "Internet sensation of the universe" often tweets about his company and other topics, and people know if he's joking. However, Musk clarified that this time he was not joking. He tweeted, "By the way, I'm serious about this."